Kasia B. T. and I performed together as “Contemporary Art in the Community” at the first “Live Art Meets” event at the Exeter Phoenix art centre two months ago. We put our “performance” together with 1 1/2 days notice and were pleased to receive an enthusiastic response on the night followed by glowing reviews in our guest book. 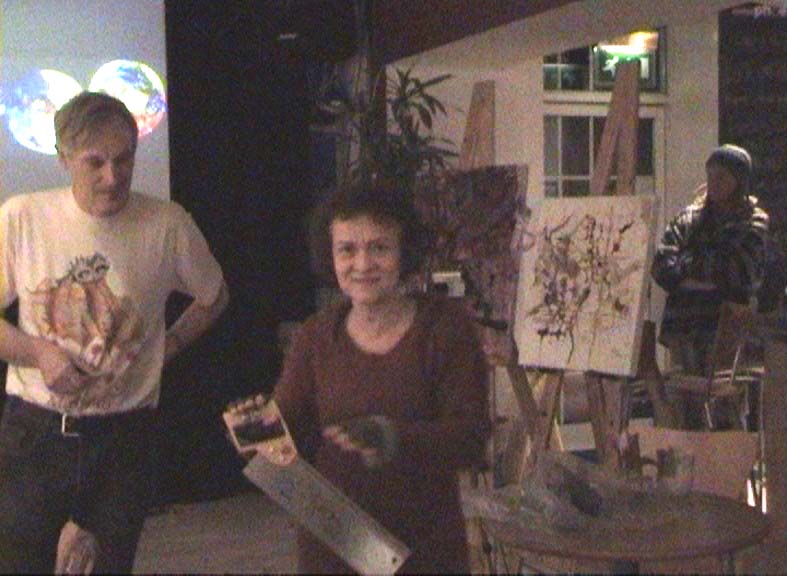 What with one thing and another we were far too busy to attend the second event last month. A few days ago however, we received the following invitation from Claire Burke via Facebook:

Fluxus was a art movement which started in 50s/60s, pioneered by folks such as John Cage and Yoko Ono

http://www.fluxus.org/ can be used as a resource.

For me Fluxus has been one of the most influential art forms. It is sometimes called an attitude rather than a movement and I feel that this attitude has enriched my every day life and outlook within it.

At Art Meets we’ll be looking at some of the Fluxus scores in the Fluxus workbook and I hope you will join me in interpreting and performing some.

Intrigued, we couldn’t resist the temptation.  Having done our bit 8 1/2 weeks ago we left our tripods at home and turned up at the Phoenix shortly before 9 PM last Tuesday, anticipating nothing more than admiring events from the depths of the audience whilst slowly sipping something cool and refreshing. Our most fervent hopes were dashed when with no notice whatsoever Claire coolly informed us that we were expected to pull small pieces of crumpled paper from her Fluxus filled hat and act on the instructions thereon! We fervently gulped from our cold glasses whilst simultaneously girding our loins as Claire kindly played us the following Yoko Ono/Fluxus video to allow us to get our act together:

By this time we had been joined in the “audience” of performers by three other brave souls, and the lottery began. The crumpled pieces of paper that we pulled out of the hat had been chopped out of her Fluxus Performance Workbook by Claire, and these were our instructions:

JLH #1 by Takehisa Kosugi, Micro 1 “Wrap a live microphone with a very large sheet of paper. Make a tight bundle. Keep the microphone alive for another five minutes”.

KBT #1 by Emmett Williams,  The Gift of Tongues “Sing meaningfully in a language made up on the spot”.

JLH #2 by  Tomas Schmit,  Sanitas No.35  “Blank sheets are handed to the audience without any explanation. 5 minutes waiting”.

KBT #2 by Eric Andersen; Opus 46 “This sentence should be not read by more than one person at the same time”

More from us on the events of that most enlightening evening in due course. In particular we’re waiting with bated breath to discover what Claire’s video camera managed to record for posterity

4 thoughts on “Contemporary Art in the Community Unexpectedly Meet Fluxus”