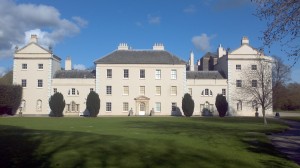 The exhibition started on a beautiful sunny afternoon at Saltram House, then later we drove to Plymouth City Museum and Art Gallery. From the museum we walked to Plymouth College of Art and then on to Plymouth Art Centre. 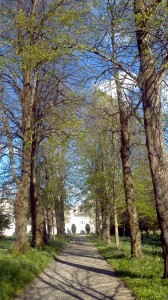 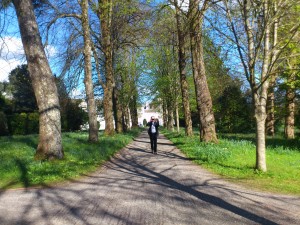 Saltram House is the perfect location to exhibit contemporary art pieces connected or responding to the question about the position of Chinese culture, industry and aesthetics in everyday lives of West European people. Saltram House is full of Chinese art: original wallpapers with Chinese motifs, Chinese porcelain, Chinese craft works, and fascinating old print books about Chinese methods of torture and Chinese way of life. It was pity that we could only see one page of each!

A few artists had their art works secreted into the very fine interiors and furnishings of Saltram House. Ed Pien presented a wonderful paper cut, called Bloom. A famous artist from Korea, Meekyoung Shin exhibited her soap vases from the Translation collection, also to be seen in the Museum. We were most impressed by two high-gloss ”lacquered” chess-tables by Wessieling. All the chess pieces represent the international world of fashion. The work is a visual metaphor for cities at war and globalisation within the fashion and textile industries.

Modern world fashion is a key source of income and investment in China and India. The pawns on the chess board are a front-line of dress makers dummies and the main pieces represent the major fashion cities of the world. Shanghai’s Pudong tower is King on the chess board. The modern Pudong district of Shanghai faces the old European style buildings of the Bund and the tower is a symbol of China’s economic growth and positioning in the global power structure. On the red/black chess board the pieces are all in place before the game. On the yellow/black board further on in the exhibition you can see the results of the battle. See these photos: 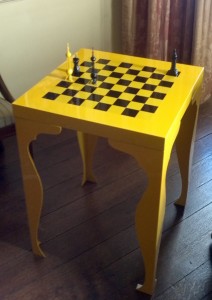 Also in Saltram House a fabulously beautiful embroidered cape can be seen with really funny images of eagle-penises, made by Grayson Perry. Of course these conform to the Chinese style: 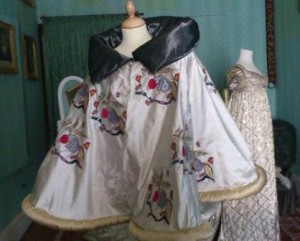 There are many more striking-controversial-beautiful-interesting-funny art works to see in the Plymouth City Museum. 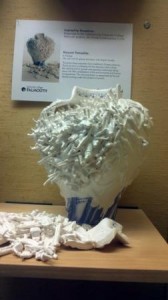 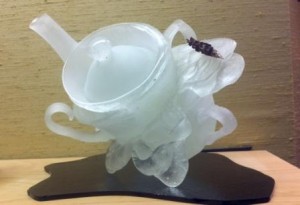 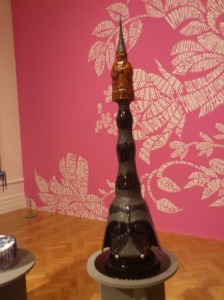 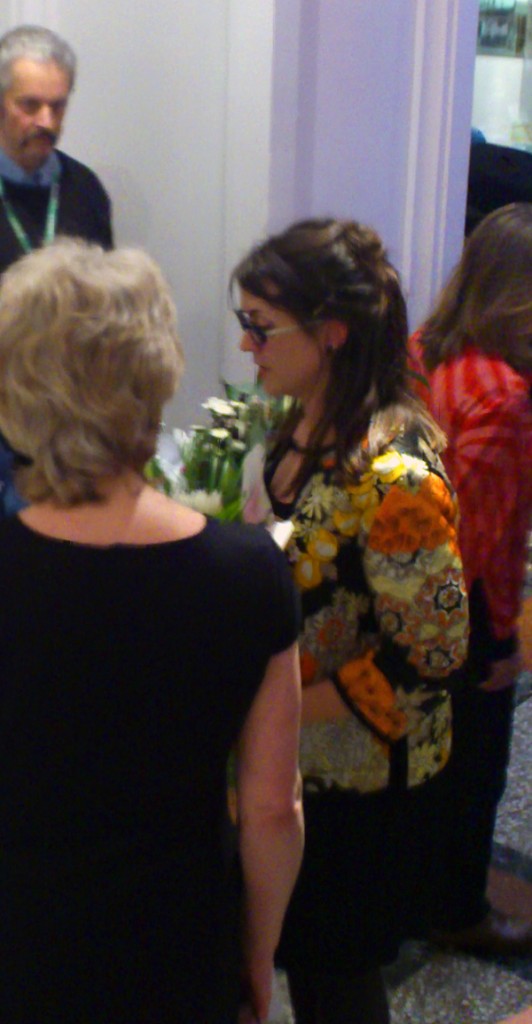 From the museum we went to the Plymouth College of Art Gallery to see “Sensing Obscurity”. I didn’t see the whole movie, just a short fragment. I can’t say too much about it. Only that I did see a ghostly Hugh Grant and lots of Saltram House.

Finally here is a short video-impression filmed in the hall of the museum. In it you can see a moving robot-ing sculpture by Stephanie Douet!

The Tower is an inverted pagoda of flowers, sharing its island platform with features typically found in Chinoiserie motifs – scholar’s rock, trellis, fantastical leaves and a small architectural element that calls into question the scale of the whole piece. Like Hong Kong or Taiwan, parted from the Mainland, it drifts around seeking ownership.