Having finally received a reply from British Telecom to my written “complaint” about their (lack of) broadband service, I called the BT Broadband Technical Helpline once again at 15:50 BST this afternoon. A recorded voice assured me that the waiting time was currently over half an hour. Unlike my previous calls, this time around I wasn’t offered a call back, so I waited on the line for over half an hour. BT’s helpline helpfully kept repeating the same message:

“As soon as possible” turned out to be 16:27, when Anthony picked up at BT’s end. I enquired about the reason for the long delay, and he told me that BT had been receiving lots of calls from the Sheffield area that day, because at one point around 100,000 people had been without a broadband connection. The BT broadband service status page seemed to confirm as much: 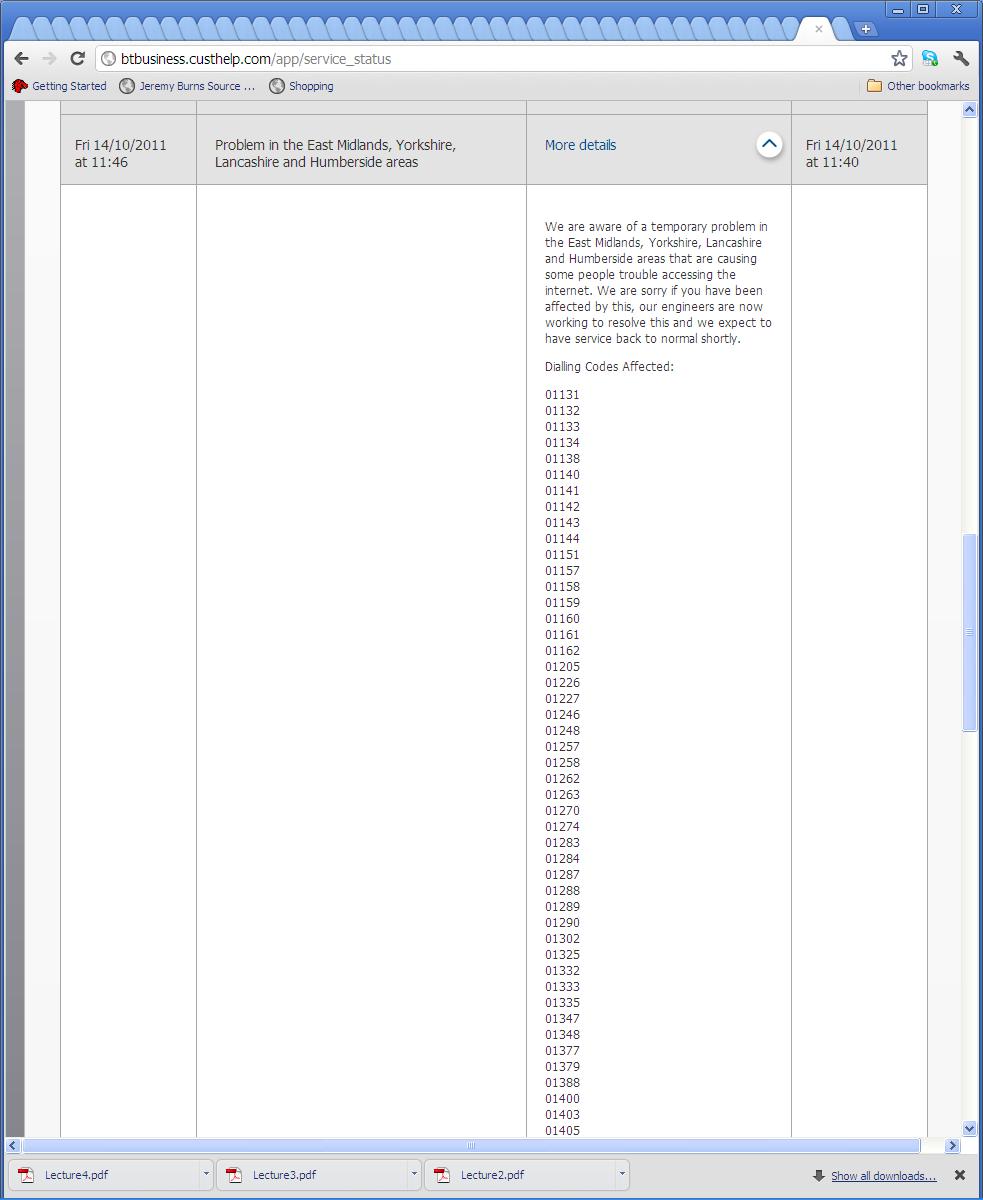 I’m slightly curious about how a problem reported at 11:46 can be fixed by 11:40, but I digress. Anthony couldn’t give me any details about the causes of today’s problem, so I asked him instead about the causes of the October 3rd broadband outage. He told me that one of BT’s authorisation nodes in Birmingham had suffered a power cut, and that as a result 25% of BT’s broadband customers had lost their internet connection, around 1.2 million customers in total. I told Anthony I was more than slightly curious, because last week William had told me that 3 of BT’s authorisation nodes had gone down, and 2 million customers were affected. I gave Anthony some more details of my requests for more information about the underlying causes of that outage.  I idly wondered whether BT Wholesale possessed such things as batteries and/or diesel generators to prevent brief power cuts in Brum from inconveniencing millions of their customers nationwide. I idly enquired whether BT could reveal the area in which power was lost, so that I might pursue that line of enquiry. Anthony went away to speak to his supervisor. When he eventually returned he passed on to me his supervisor’s suggestion, which was that if I was still unhappy I should give Ofcom a call. I assured Anthony that I was indeed still unhappy, and would follow that course of action.

4 thoughts on “BT Apologise to Another 100,000 Broadband Customers”