Having bought a pair of tickets to this year’s TEDxExeter the day they went on sale I finally got around to working out what to expect there the day before the event.  On opening their web site on April 11th I discovered that the theme for the 2013 event was “Living the Questions“, and the most recent blog post was entitled “If you could ask a stranger any question, what would it be?”, which suggested that:

The English talk about the weather because we find the exchange of personal information too uncomfortable.

which led the TEDxExeter “Storyteller” to ask the question

I wonder whether it would be possible to overcome those inhibitions at TEDxExeter? We could prepare ourselves, have a question ready to ask and be open to the questions others ask in return.

As regular readers of the “Implementing Imagination” blog will know, despite being born and bred in England I have no qualms about approaching total strangers and asking them about contemporary art instead of the weather! I therefore instantly decided to enter into the TED spirit of things. I wandered (virtually) from the TEDxExeter blog over to Twitter in search of some immediate (albeit still virtual) interaction with some English strangers. The #TEDxExeter hashtag revealed the following “tweets” to me:

Since Damo and Boris had been kind enough to start the conversation I replied as follows:

@damocross @clarebryden @borispomroy Since you ask, I shall be at #TEDxExeter tomorrow. I’m a stranger. What will you ask me?

Click the date to discover what happened next in the virtual world of the Twittersphere. To cut a long story short, I decided to ask some English strangers the question “Are you worried about the Arctic Sea Ice“, in part because it is in fact related to the English weather, but mainly because it’s a subject I think everybody should be interested in at the very least, although very few people actually seem to be!

In real life the next day Kasia and I arrived at the Northcott Theatre, and I set about asking people my question, along with trying to find the strangers I’d “met” on Twitter the evening before in order to ask them my question face to face. The people we sat down next to were certainly worried about Arctic sea ice.

At the first coffee break I discovered that I still had a few leaflets left in my backpack after a recent trip to Oslo. I took them to the TEDxExeter “Connections Stand”, where Helen assured me that she was worried about the Arctic Sea Ice too: 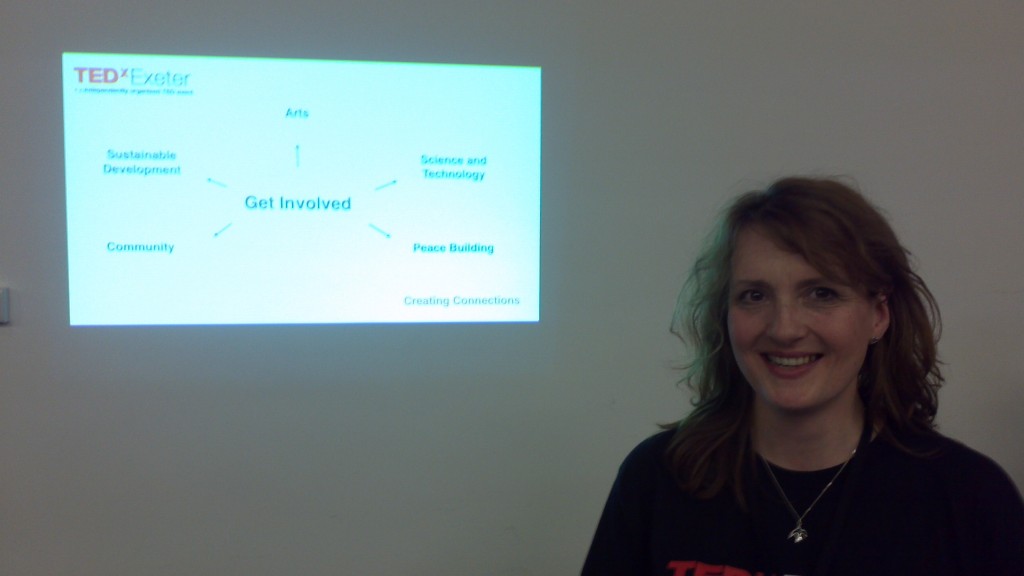 Helen Drever helping everyone "get involved" at TEDxExeter 2013

That being the case, it seemed like a good idea to leave a few of my pieces of paper on the connections table: 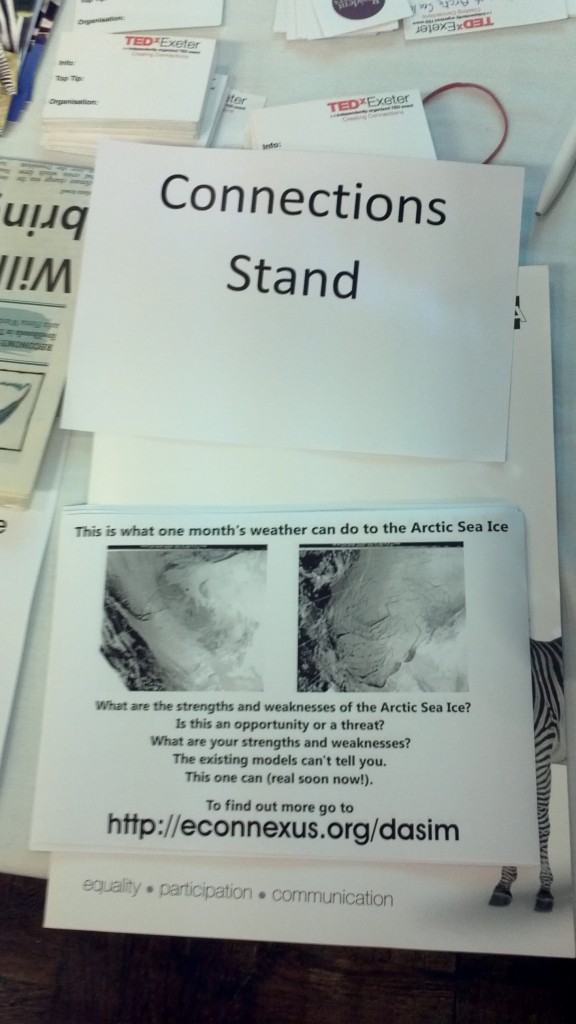 The Mirror Crack'd from Side to Side, at TEDxExeter 2013

After that I also managed to put my question to a couple of the speakers from the first session. Both Peter Owen-Jones and Jonathon Porritt were very worried about the Arctic Sea Ice.

After the next session of presentations we were queuing for lunch when Damo unknowingly came up to me to ask me if I’d like to put my business card in his bucket. I discovered that his company Colour Burn was filming the event, and that he too is very worried about the Arctic sea ice.

Although I didn’t get to ask him my question in person it became obvious after lunch that at least one of the other speakers was very worried about the Arctic sea ice too. Stewart Wallis is Executive Director of the New Economics Foundation, and was the final speaker of the day. He actually showed a slide displaying the rapid decline in Arctic sea ice to the assembled crowd, a bit like this one:

Stewart also showed us all a video of the nef’s Impossible Hamster, as a partial explanation for that decline:

The commentary to the video asks another question, on Stewart’s behalf:

In answer to that question here’s a video from another TED event. This one shows Tim Jackson in 2010 explaining that:

This is a strange rather perverse story. Let me put it this way in very simple terms. It’s a story about us people, being persuaded to spend money we don’t have, on things we don’t need to create impressions that won’t last on people we don’t care about.

By the time Stewart Wallis left the stage at the Northcott I had discovered that Clare was in fact the TEDxExeter Storyteller, and that she was sat with her laptop at the back of the Northcott Theatre. I caught up with her there after the show was over, to discover that whilst she was aware of the declining sea ice in the Arctic, she didn’t seem at first sight to be as worried about it as Damo or Stewart or I.

At the end of the day on April 12th 2013 I never did get to meet Boris in person, but at least we now have a date for TEDxExeter 2014. Perhaps then I’ll be able to ask him this question too:

Are you worried about the Arctic Sea Ice?

3 thoughts on “Living The Question – “Are You Worried About the Arctic Sea Ice?””